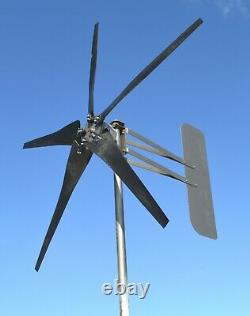 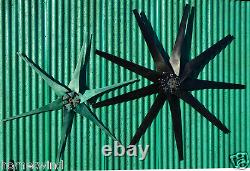 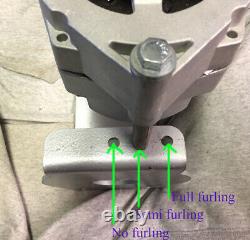 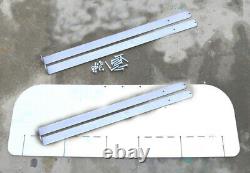 With a 12 volt AC / 3 phase PMA. Our 1685 series wind turbines are made to extract maximum power from all types of wind zones. Up to 1685 Watts plus! Wind is great to mix with solar too!

The world's lowest priced production wind turbine in its class! CC-1685's are designed for class 2 to 7 wind zones. The 1685 series represents our most powerful all range winds turbines. Many mountain tops canyons and passes can generate these types of wind speeds on many days of the week.

In order to operate a grid feeder and turn your power meter backwards you will need 11 MPH wind speed minimum. 1685 series - Our toughest and most powerful wind turbines!

No slip rings to fail or replace. Aerodynamically tapered blades for maximum output.

They lift and push at the same time. The boundary layer effect on these blades is pure perfection! The whole blade is perfection and could only be described as one big long wind catching'sweet-spot' from bass to tip.

The very best electricity generating turbines are not pushed by the wind so much as they are pulled. Making electricity needs medium-high RPMs at the alternator, and blades that are pushed can never go faster than the true wind speed, usually much slower.

These are called "drag turbines". Good turbines rely on aerodynamic lift to turn them: the forces involved are greater, and the blades can spin many times faster than the wind, just as a catamaran can sail faster than true wind speed. A blade with tip-speed ratio (TSR) of 5 will spin 50mph in a 10mph wind, creating its own apparent wind of 51 mph. The apparent direction of that wind moves closer to the blade's rotational plane the faster it spins; likewise, the blade tip sees a faster and shallower apparent wind than the blade root. As the apparent wind contacts the leading edge, it splits.

Some air goes along the convex back, some goes along the concave front. The streams adhere to the blade surface and adjacent air by boundary layer effect. The concave side air slows down, generating a net positive air pressure; the air flowing over the convex back of the blade speeds up, creating a net (and stronger) negative air pressure. Both sets of pressures act perpendicular to the surface of the blade. The forces act in all different directions and intensities, but the net force is a flexing and forward one. The flex force is canceled by the blade's stiffness; what's left is a forward vector of surprising strength: There's a fairly narrow window of apparent wind direction or attack angle - in which a lifting airfoil will operate efficiently. The flow along its sides must be smooth, and it must remain attached to the blade surface. If it detaches, the result is lost lift, terrible drag, and turbulence, with attendant noise and vibration. These conditions are known as stalling (attack angle too steep) and luffing attack angle too shallow. Wind turbine designers have developed numerous strategies to keep the apparent wind angle correct, which is especially hard given that different parts of the blade are moving different speeds, and to keep lift strong and constant along the full length of the foil. These strategies can be grouped in pairs: Taper and draft, twist and pitch.

Near the hub of a propeller-style-turbine, the apparent wind is slower and closer in direction to the true wind, the blade root has a wide chord (breadth) and a fairly deep draft, and it faces more toward the true wind. The blade tip is traveling very fast, too much breadth or'cup' would create crippling drag, so the blade there tends to be narrower and flatter. The tip also experiences an apparent wind nearly in line with its rotational plane, so it needs very little twist.

Finally, the best HAWTs (horizontal-axis wind turbines) are able to rotate the entire blade to vary TSR, optimize lift, and keep the alternator spinning at its prime electricity-making RPM. They use taper, draft, twist and pitch all at once. For what it's worth a brief look at why the world's best engineers design HAWTs rather than VAWTs (vertical axis wind turbines). The very worst VAWTs are pure drag machines: paddles pushed by the wind.

Their maximum apparent wind is the true wind MINUS their own rotational speed, so they can never go fast and the wind's force is gutted. And two-thirds of the time, a given blade is either contributing nothing or plowing headlong INTO the wind. These generally fall under the heading of Savonius Rotors. Their TSRs are always less than 1.0, and their efficiencies are gruesome.

Better, though not much, is a class of semi-lifting VAWTs classified as Darrius, Modified Darrius, or Gyro Rotors. These include the famous'eggbeaters' and more modern designs.

Almost half the time, their blades are on or near a "beam reach, " moving perpendicular to the true wind, which sailors know is the fastest, most-efficient point of sail. But the back blade is operating in the wind shadow of the front one, its draft must somehow be inverted, the downwind blade is dragging some, and the upwind blade is a sea anchor.

Darrius blades are pulling maybe 50% of the time. They aspire to TSRs of 2.5, they do spin faster than the wind, but not much.

A HAWT experiences great lift over a 100% power stroke. That's why GE, Mitsubishi, and Vestas build them that way. Pound for pound and dollar for dollar HAWT'S are winning the economic battle for cheap and reliable wind power. The item "KT5 Wind Turbine Roller+Furl SC 5 Blade 1685W 12 volt AC 3-wire 6.3 kWh" is in sale since Wednesday, December 11, 2019.

This item is in the category "Home & Garden\Home Improvement\Electrical Supplies\Alternative Energy Supplies\Wind Power Supplies\Wind Turbines & Kits". The seller is "hornetwind" and is located in Lancaster, California. This item can be shipped worldwide.