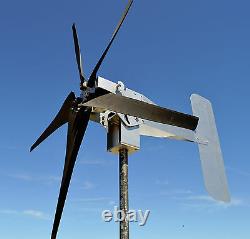 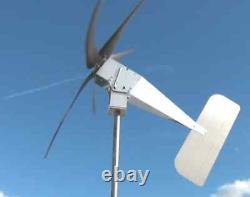 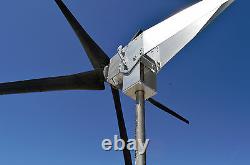 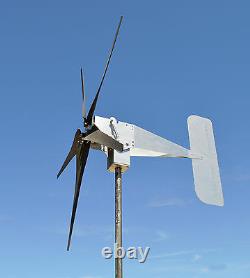 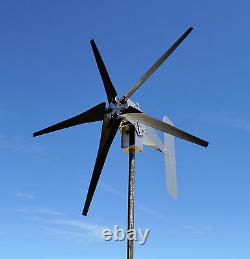 Wind Zones are defined by m/s Wind Zone 1 0 4.4 m/s (Wind not recommended, go solar in this wind zone) Wind Zone 2 4.4 5.1 m/s Wind Zone 3 5.1 5.6 m/s Wind Zone 4 5.6 6.0 m/s Wind Zone 5 6.0 6.4 m/s Wind Zone 6 6.4 7.0 m/s Wind Zone 7 7.0 9.4 m/s (20-22 mph). We call it the "Typhoon" since it is built to survive Typhoon winds. Typhoon up-tilting turbines give maximum performance at all times and never stop making power even in the most stormy weather. Transitions from over speeding tilting protection and full power production are not interrupted by reset periods or the turbine listing off to one side or the other and not facing directly into the wind making full power. Also tails that yaw to the left or right tend to make wires twist inside since they favor to continue making left or right spinning loops. This makes the use of an expensive and often undependable slip ring necessary. Turbines that "Up-Tilt" do not favor spinning to the left or right so twisting wires are not a concern in most areas with this type of turbine yaw mechanism. The unibody concept of the Typhoon wind turbine is unique. Other up tilting turbine designs had a PMA that up tilted but this caused the need for rubber bumpers as the PMA would come down rather hard and abruptly.

The unibody design of the Typhoon is nicely counter balanced by the tail and whole body of the turbine allowing it to more gently pivot up and down as shown on the videos below. The PMA is mounted in a tight box frame protecting it from flying debris or even a tower fall. This is a superior way to mount a PMA from the front and not the rear. While other turbines are snapping blades during storms the Typhoon will simply lift up and reduce 50% of its surface area allowing the wind to spill off the top of the turbine. This wedge like shape also pushes the turbine downward holding the top plate tightly to the pole which prevents it from swinging around wildly in stormy winds.

The Typhoon unibody up tilting wind turbine design has a U. Patent pending number issued and we think it will be one of the most sought after turbines for years to come. 14 magnet none-cog MAX-Core PMA/PMG. You will receive only the most modern magnet core with deep saturation slotted magnets providing deep reaching pole power into the stator coil for maximum amperage. KT blades make this turbine the most powerful clear on the market.

True PMA for efficient power generation. No slip rings to fail or replace. Aerodynamically tapered blades for maximum output. / Ships UPS in One 9" X 9" X 46 Box. There are plenty of "Look-A-Like" PMA's on the market that cost less. Spend a little more and get a LOT more BANG-FOR-YOUR-BUCK!!! Powered by Hornet Power Systems.

The item "2400W Typhoon Up Tilting Unibody Yaw Wind Turbine Generator 5KT props 48 Volt DC" is in sale since Thursday, December 21, 2017. This item is in the category "Home & Garden\Home Improvement\Electrical Supplies\Alternative Energy Supplies\Wind Power Supplies\Wind Turbines & Kits". The seller is "wind_turbine_generator" and is located in Lancaster, California. This item can be shipped worldwide.